On July 9th through 11th, Todd and I went up to the Sawtooth Mountains for a short backpacking trip.  We hiked from Grandjean into Trail Creek Lakes, a cluster of small alpine lakes in the northern tip of the wilderness.  The hike was about 4.3 miles with an elevation gain of 2906 ft.  A constant uphill with moderate slope dotted by occasional switchbacks.  Two sets of switchbacks stand out on the second half of the trip and the final push to the lakes is mostly straight up.  The trail gets lost in a wetland for about 100 ft.  There were 4 stream crossings which we did not need to take off boots for-although Todd did slip into a deep pool and got his feet very wet.  Amazing waterfalls and stream formations appeared the second half of the hike. 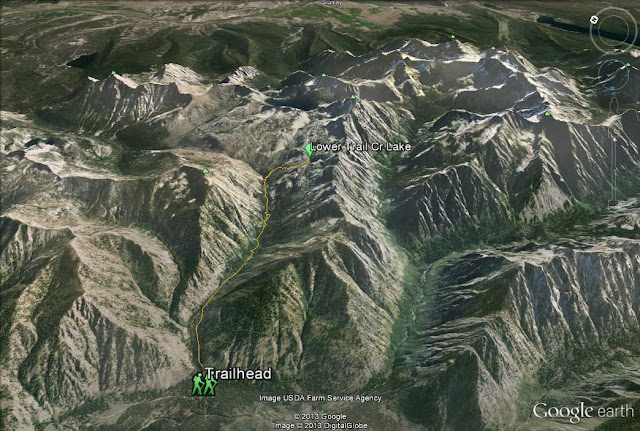 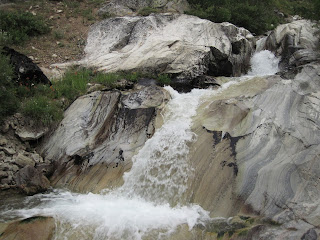 When we got to the lake, I was exhausted.  Our packs weighed 45 lbs and my body is very out of shape compared to the Forest Service Days.  Like most alpine lakes, the scenery unfolds after cresting the last edge near the outlet stream.  This was no exception.  We were greeted by a blue lake, tall jagged scree on the left, rolling granite on the right, and a waterfall directly across from where we stood.  A flat spot that has been heavily used for camping was quickly covered with our gear.  After all the hiking up, I was not to tired to throw a line in the lake. I used my fly pole and Todd used his spinner.  The smallest fly caught the biggest fish.  Todd had only one bite, I had multiple.  In the right spot, flyfishing rules. I caught three little fish, two cutthroat and one rainbow.  Todd caught one little fish, a cutthroat.  So we kept three and at them with dinner.  As Todd was gutting the largest one, he noticed the start of eggs forming.  We decided not to keep anymore large colorful fish so they can continue to reproduce. 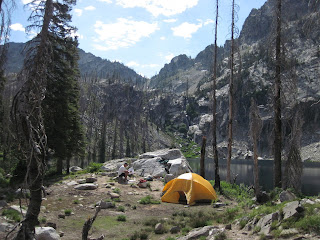 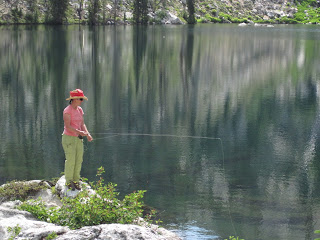 The first night was a rough sleep.  Achy bodies, warm temperatures, animals outside the tent causing Henry to bark, ugh, so much for peace in the woods.  The ungulates we saw were elk and deer, up at the lakes! 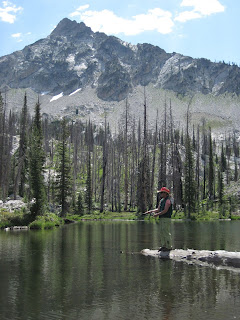 The next morning we hiked to the upper Trail Creek Lakes.  An easy scramble with light packs and fishing gear, we enjoyed our mosquito attack lunch.  We both went swimming and I tossed a line in.  The day was warm and it was mid-day.  The fish were huge but swam right past my lure.  I tried multiple sizes and placement, but the fish were not interested.  While I was chasing these fish, Todd and Henry were out exploring the surroundings.  They came upon a high alpine spring which Todd drank straight from. Soon after, we reunited for lunch and explored more on our way back to the lake.  We stood at the top of the waterfall, Henry got plenty of swimming fetch, and were amazed at the different colors of each lake.  As a sign of the day, Henry was pooped out, not even asking for a stick toss. 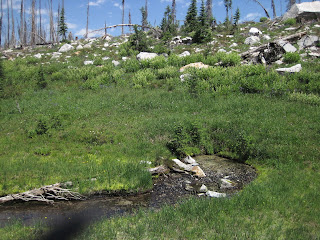 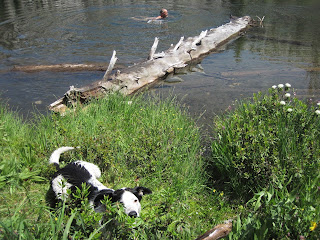 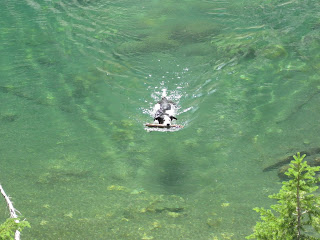 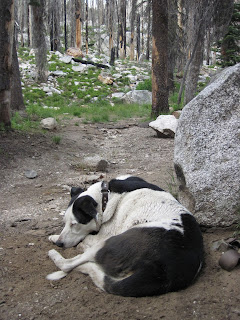 We moved camp to a more secluded place, away from the lake outlet, and not as dirty and used.  The dirty was mostly from campfire ashes scattered about.  It is illegal to have a campfire in the wilderness, you must have it in a fire pan or on a fire blanket.  After camping surrounded by old fire rings and ash, I agree- leave no trace!  It is also upsetting when live trees are hacked at and left to die. What primitive need gets fulfilled by violently harming nature!?  In these high alpine areas, few trees grow and the few that were there have been burned in a forest fire.  So we moved from a human destroyed camp so something less disturbed- I did not hike into wilderness to be surrounded by the ugly side of humanity.

Once again, as evening rolled about, I tossed the fishing line in the water.  The lake was warm enough to stand in near the shallow shores.  I was having little luck, a nibble but no bites.  I started to climb out of the steep banked lake and felt a tug on my fishing line- inadvertently, I caught the biggest fish in my short fishing time.   This was a beautiful cutthroat.  A bit slender, but most of the lake trout appeared so. 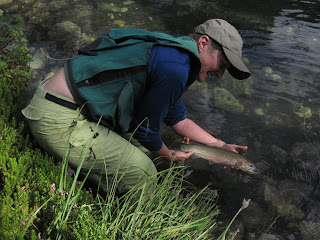 The next morning, we headed down the hill back to Boise and the heat. 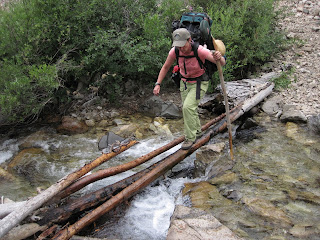 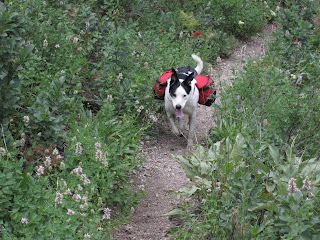 This has been another busy summer with little leisure time.  Back in July, two days before the Fourth, Todd and I met up with Leslie and rafted the Main Payette.  This, unfortunately, has been the only trip I have oared this summer.  It was a fantastic trip.  Flows were at a good level, hovering about 4100 c.f.s..  Leslie and I shared time at the oars and Todd kayaked.  Sunny fun day. 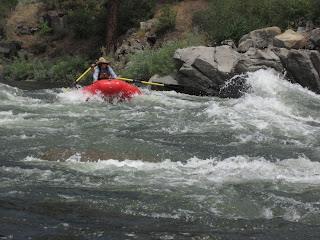 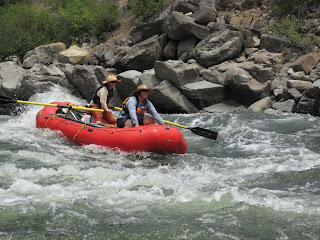 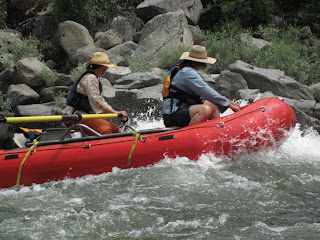 Henry is in the raft too.  He is crunched down in the back.  You can see a little bit of his back end in the lowest photo bottom left.


However, either on the Main Payette or the Boise River, I happened to get poison ivy on my feet.  The signs did not begin to show until Todd and I were up in the Sawtooth Mountains.  At first I thought I was experiencing itch from mosquito bites on my feet while trying to sleep in a warm tent.  It was not until we got home did I realize something else was at play.  My feet were stuck in hot sweaty boots for a few hours each day.  This pushed the poison ivy irritation inward and it went systemic, creeping up my legs and showing up from my toes to my hips.  Benedryl, hydrocortizone cream, and air were used in the week and a half long treatment.  If I was not at work, I wore skirts and no shoes.  Even after it went away, my feet were still torn up and scaly.  Ah, to live in this body.
Posted by Ms.Lou at 8:02 AM No comments: